Jo Nesbø’s Harry Hole series is without a doubt my all-time favorite. Of this series, THE SNOWMAN (Book 7) has been my favorite series installment (and book in general!) for years now. So naturally, when the news broke that this book would be adapted into a film starring Michael Fassbender, I had to celebrate! In that spirit, I spent the month of September leading a virtual book club for this brilliant read in anticipation of the movie’s release this month. It was so much fun discussing THE SNOWMAN both with Nesbø newcomers and longstanding fans alike! I was utterly blown away by the reception this book club received; not only did I have a fantastic bunch of readers to discuss the book with, but my social media has been flooded with photos of Nesbø books from around the world - a selection of which you can view at the bottom of this post!

Because this wasn’t my first time reading THE SNOWMAN, this won’t be a traditional review - but I do want to highlight for you the reasons that THE SNOWMAN is my all-time favorite book, and share a bit about my experience re-reading this book that I love so much! PLUS: this post also features an “FAQ’s” section on the most common questions I receive about THE SNOWMAN - and my responses! 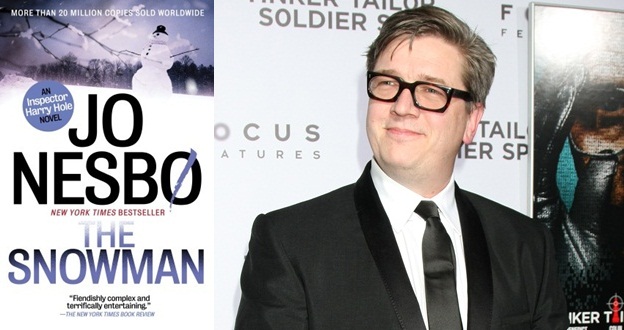 Plot Summary:
One night, after the first snowfall of the year, a boy named Jonas wakes up and discovers that his mother has disappeared. Only one trace of her remains: a pink scarf, his Christmas gift to her, now worn by the snowman that inexplicably appeared in their yard earlier that day.  Inspector Harry Hole suspects a link between the missing woman and a suspicious letter he’s received. The case deepens when a pattern emerges: over the past decade, eleven women have vanished—all on the day of the first snow. But this is a killer who makes his own rules . . . and he’ll break his pattern just to keep the game interesting, as he draws Harry ever closer into his twisted web. With brilliantly realized characters and hair-raising suspense, international bestselling author Jo Nesbø presents his most chilling case yet—one that will test Harry Hole to the very limits of his sanity.

I want to preface this whole review by saying: I am not a re-reader. When I find a book I love, I savor every single page, perhaps re-reading passages in the moment—but once that experience is over, it’s over for me. I don't want anything to mess up the magic of that first read, so I just don't re-read. Instead, I prefer to learn more about the author and inspiration behind the story—or collect tons of editions of that book! Anything I can do to immerse myself in the author's world, I will (for example, I even went to Oslo and visited the key locations from Nesboø's Harry Hole series!)—I just don't want anything to spoil that perfect first reading experience. Suffice it to say, when I decided to re-read of THE SNOWMAN in anticipation of its movie release, I felt a bit of trepidation. It’s not that I had any doubt in Nesbø as a storyteller—I’ve read every single one of his books, and know exactly what he’s capable of as an author. (He is my favorite author, after all!) But I had this irrational concern: what if I didn’t feel that same bit of magic that made me so devoted to this particular book within the Harry Hole series years ago? That inexplicable, fleeting perfection of reading a book that you know will forever be a favorite—does that feeling only happen when you’re reading a favorite book for the first time?

I had nothing to worry about - my adventure into re-reading simply couldn’t have gone better. Re-reading THE SNOWMAN was just asgripping, immersive, and utterly chilling as I could have hoped it would be; in fact, re-reading it this time around with my reviewer lens on gave me a whole new appreciation for just what makes this book so brilliant. That "perfect reading experience" feeling was very much still there—in fact, it might have been even stronger this time around. I knew it on a gut level when I first read THE SNOWMAN, but after two years spent reading and reviewing solely crime fiction, if anything I fell even harder for this story than I had before. Nesbo’s storytelling mastery is evident in every page and every sentence of this outstanding crime novel.

The Harry Hole books are superior police procedurals with a pitch-perfect blend of cinematic action and heartfelt character development, and THE SNOWMAN is the finest work from an author who is, simply put, great. But what exactly stood out to me during my re-read?

Nesbø is does not rely on gimmicky “twists” or “reveals.” Yes, of course there is an ultimate reveal of The Snowman’s true identity, but going into this book already knowing that outcome did not take away from my reading experience in the least. Nesbø’s books never rely on those “out of left field” twists, where you know there’s just no way you could have pieced together the truth on your own. Nesbø’s writing is methodical and detail-oriented; knowing the killer’s identity from the get-go actually highlighted for me the mastery of Nesbø’s plotting, and allowed me to see the subtle hints that I totally, completely missed on my first read of this book. Nesbø manages create a trail of very logical breadcrumbs to lead readers to the killer… and yet he’s also brilliant at concealing these clues just enough to keep you in the dark.

Nesbø’s character development is unparalleled. It goes without saying that the story’s main characters are superb: if you’re looking for a character who is multifaceted, troubled, sometimes frustrating, and always totally endearing, it just doesn’t get better than Harry Hole. What also struck me during this re-read is just how developed even the story’s “minor” characters are. In fact, I say “minor” in quotes because it doesn’t quite feel right to say that about any of the characters Nesbø puts forth in THE SNOWMAN—they each bring a unique element to the story, and one of them in particular (the mold man - see my FAQ’s below!) has even prompted massive debate among Nesbø readers.

This book achieves that elusive balance between cinematic, action-packed thrills and methodical police procedural—a total testament to Nesbø as a writer. THE SNOWMAN is injected with a darkness that is genuinely chilling (in one interview, Nesbø explains how this book almost comes close to having horror elements in it), yet it also manages to simultaneously deliver a really excellent procedural with all the detailed investigative work that readers of this style of crime novel would expect. Striking this balance is no easy task, and Nesbø’s ability to deliver such a seamless blend is really outstanding. It’s this balance that first made me so captivated by THE SNOWMAN, but during my re-read (and after having read and reviewed what must now be hundreds of crime books since my first read of THE SNOWMAN,) I was struck once more by what an outstanding and widely-appealing genre-bend this thriller represents.

To sum this up: THE SNOWMAN is a brilliant piece of crime fiction, a masterful procedural, an unmissable character study, and a must-read.